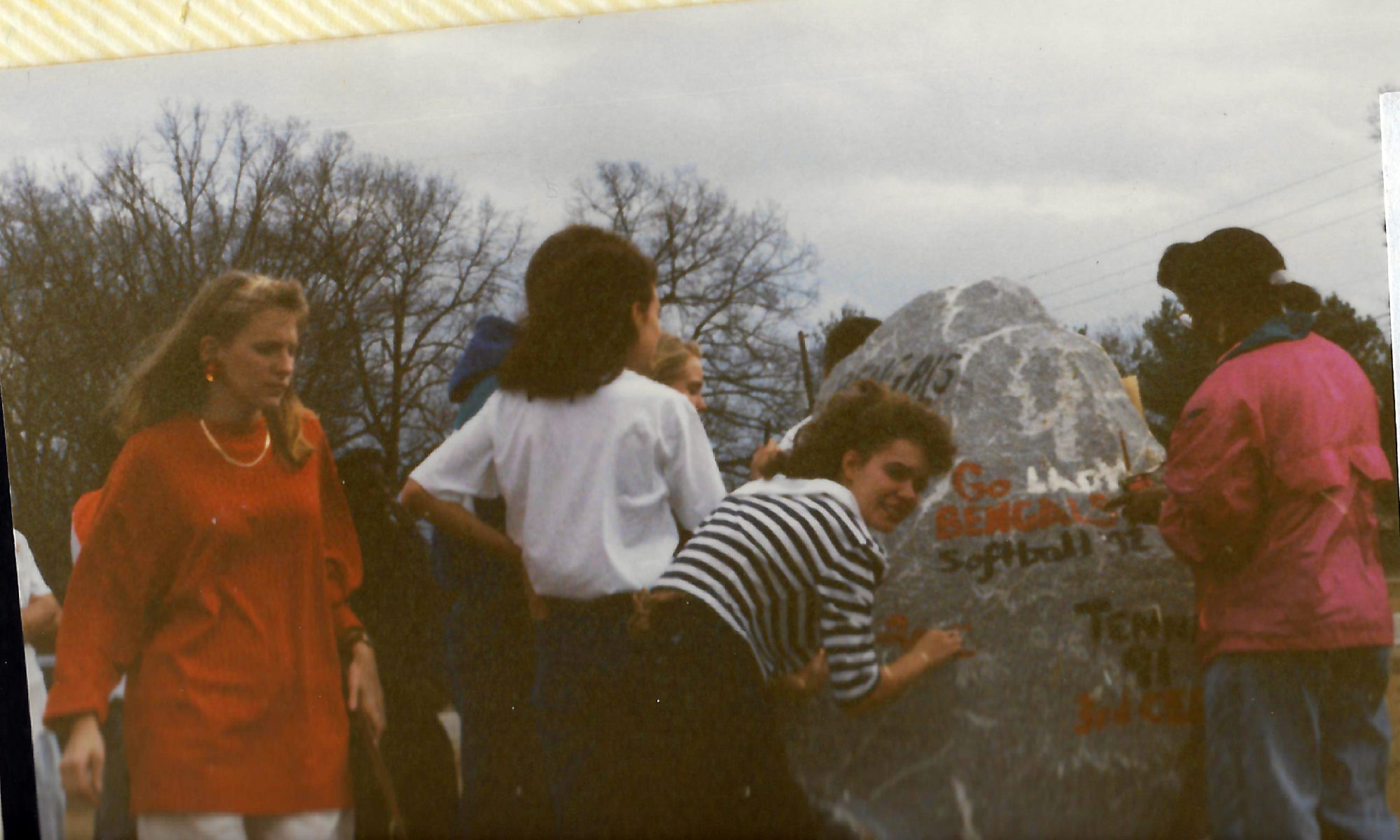 Noting the frustration with the reporting on the SPIRIT ROCK at Fuquay-Varina High School, followed by calls from students who remembered some of the facts, the Museums of Fuquay-Varina researched the story today. Acting as investigators were museums volunteers, Sonia Webb, Bryant Tyndall and Shirley Simmons with some dedicated help from a local native, Edwin Holleman. Edwin suggested we present the facts as EXHIBITS, encouraging readers, bloggers and all interested to read, You, the jury now have the facts: deliver a verdict!

Based largely upon the Minutes of the Student Council from their Scrapbook of 1991-92 called “The Eye of the Tiger,” with an additional notation from the Fuquay Independent, here are the facts. The Spirit Rock was donated to FVHS upon request by letter from the Student Council Advisor, Shirley Simmons, to Martin Marietta Aggregates. It was delivered by Martin Marietta. Shirley Simmons recalls the truck which delivered and the agreement that the rock could be as large as the company could feasibly truck and deliver. This is the same rock which was located off the entrance as of 2019 and intended to be a permanent feature of the campus at Fuquay-Varina High School. Officially, it was dedicated to Red Seagroves who served as the “voice of Fuquay sports” for so many years.

Ashley Holleman was President of the Student Council, Vice President, Kelly Ransdell, Stacy Slaughter served as Secretary, Meredith Macon as treasurer, and Shirley Simmons (now at the museums) was their sponsor. Members of that year’s Senior Class who served on the Student Council were: Brenna Booker, Manya Brachear, Meredith Gardner, Ashley Holleman, Kelly Ransdell, Karen Truelove, Mark Tutor, and Jodi Wrenn. Senior Class President was June Holland. These are all verified (along with other members for lower classes) in the scrapbook.

This annual scrapbook prepared at the end of that school year detailing the work of the council, has this explanation of the Spirit Rock Project, along with pictures and a copy of the news clip from the Independent of Nov 20, 1991. Students, even one who is now a teacher at FVHS, can be identified.

“To show FVHS PRIDE, the Student Council sponsored a day in which students could paint spirit ides on the SCHOOL ROCK. The council arranged for a local company to donate the rock for the school. It was dedicated in honor of RED SEAGROVES, our long time announcer.”

Newsclip from Independent: “Student Council has not only aimed for high holiday spirit, but high school spirit as well. The newest addition to the campus is “The Spirit Rock” now marking the front entrance. “ (verified by Sonia Webb of museums in Fuquay Independent of that date in a front page column written by Manya Brachear.)

The following notations are excerpts from the minutes of the FVHS Student Council. Notations in parenthesis have been added by Shirley Simmons for clarity of cursory minutes to help the general reader.

Exhibit # 2: September 10, 1991: “A Red Seagroves Night was brought up. Mrs. Simmons and Ashley explained who Red is. The idea was approved.”

Exhibit # 3: September 24, 1991: “ A letter was read to Mayor (Alfred) Johnson requesting Red Seagroves Day be designated. Other suggestions: a spirit rock in his honor. Mrs. Simmons has called and a letter has been mailed to Martin Marietta as requested by them. Student council members were asked to consider where a rock might best be placed on campus. “

Exhibit # 4: October 22, 1991: “Red Seagroves Day was next discussed. Plans are underway for Nov. 8. The jacket has been ordered. Information for a booklet with letters from principals and others is being collected. Manya will take some candid shots in the booth this week which we can use in the booklet. There was a suggestion from Ashley that we have refreshments in the booth for the crew and Red and guests after the game. Mrs. Johnson will provide this but we have to serve it. The council adopted these plans.

Exhibit # 5: October 29, 1991: “Red Seagroves Day was next on the agenda. Everything is falling into place…. The Spirit Rock report was given by Mrs. Simmons. The man (from Martin Marietta) has been out of town for two weeks but is to call this week. We will give the news (about delivery and costs if any) as we get it. Suggestions were made and finally Ashley got someone to move that the rock be placed across from the sign off the entrance road. It was passed. Some talk of painting and how to do this was begun. No decision was made and members were asked to think about this until next week when we had definite dates.

Exhibit # 6: Nov. 5, 1991: “Red Seagroves Day details were gone over by Ashley…. Spirit Rock was next. Many ideas were discussed about a ceremony for decoration. It was decided to divide it (the rock) by classes finally.

Exhibit # 7: Nov. 12, 1991: “ Red Seagroves Day evaluation was next. Ashley reported that he was very surprised and appreciative…. Red did agree to come to paint the Spirit Rock if we plan a time for a painting.

Exhibit # 8: Nov 19, 1991: “Kelly proposed that on the front of the Spirit Rock be painted: FVHS and a Tiger Paw. The art department has been asked to provide a stencil and guests will be asked to paint a part of a letter. Other invited groups: all teams, classes, and all clubs, the band, and other organizations. “D” date recommended was Dec 3 or Dec 2. Coaches and clubs should decide who and how many should paint and what they might use related to the school and spirit. The council got really excited about this plan and Aubrey moved the adoption of this report. It passed for the date of Dec. 2. Kelly will get the sheet out to all clubs, etc.”

Exhibit # 9: Dec. 3, 1991: “ Spirit Rock postponed (the painting) due to rain on Monday. The date was set for Friday, Dec. 13th. It was moved and seconded….People were reminded to tell all who were planning to paint.”

Subsequently, the painting of the rock could be said to follow no specific direction. Even an opponent or so has invaded. However, THE SPIRIT ROCK, which has been a feature for 28 years this November, should remain a part of the Fuquay-Varina High School permanently based upon this history, the Student Council and student intent, and the memory of Red Seagroves.

Social media can be credited with bringing this to public attention. Regrettably , social media is not the most reliable forum for documentation. Hopefully, the proper officials will be encouraged to find a way to honor this memorial and The Spirit Rock will reside on the campus of Fuquay-Varina High School for many years to come.