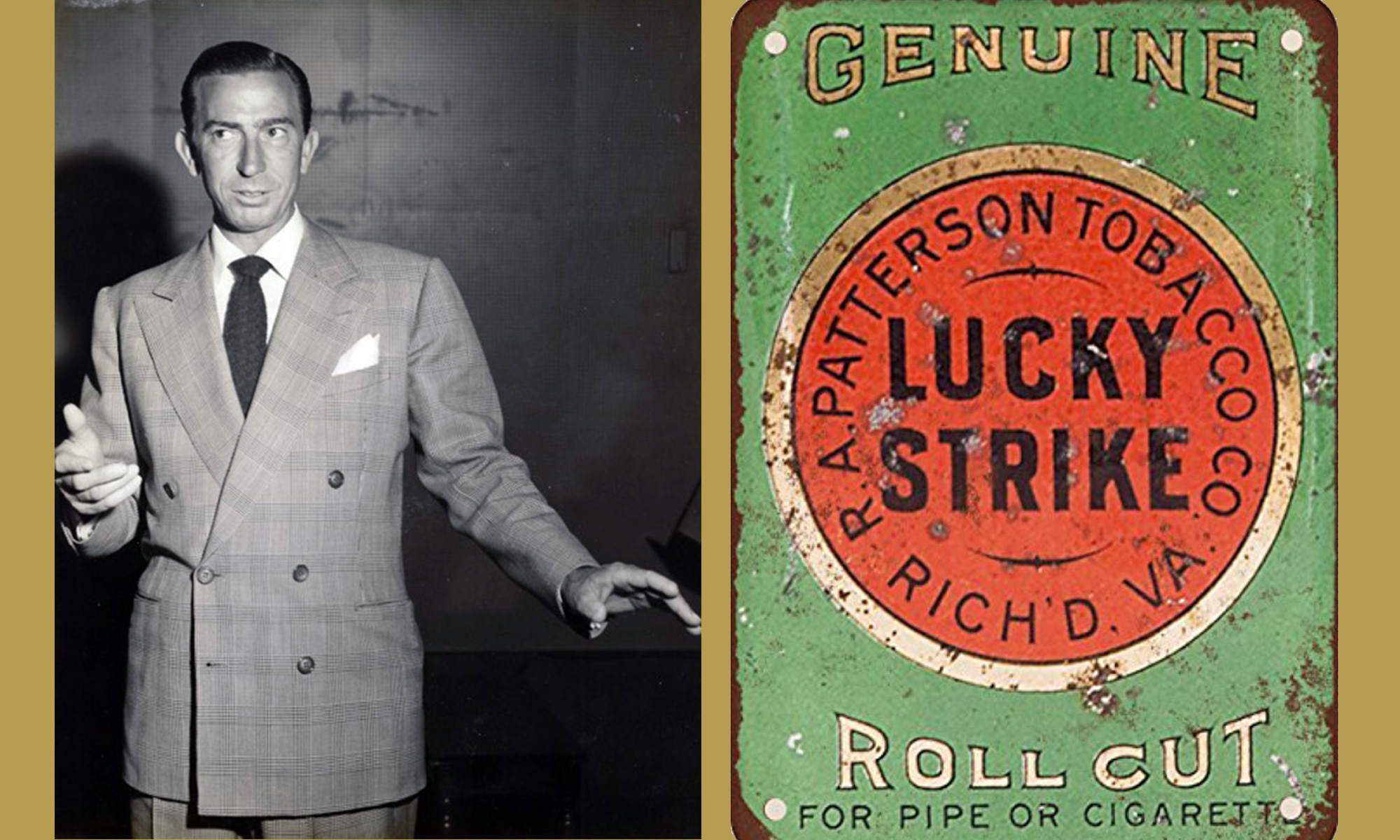 Speed Riggs, a native of North Carolina, was quite a big name in the history of tobacco and even in philanthropy. Not many people are aware of his connection to Fuquay-Varina. Probably only a few people who have visited the museums are even aware of his being a feature in our Tobacco Case. We even have his “Lucky Strike Means Fine Tobacco” LSMFT on tape in our audio visual collection. But just in case you come or you won’t come, let us tell you more of this interesting gentleman.

Lee Aubrey Riggs, the son of Mark and Callie Riggs, was born on Feb. 18, 1907 in Onslow County North Carolina. There three boys and two girls grew up on tobacco farming but moved to Goldsboro where Mark worked as a carpenter at times, too. At Speed’s death on Feb. 1, 1987, only two sisters, Beatrice Riggs Godwin and Reba Clell Riggs survived him.

Mark took his seven year old son with him to a Maysville tobacco warehouse and young Lee was captivated by the auctioneer. A drop out from school in the fifth grade, he continued to work at his dream of becoming an auctioneer, not just any auctioneer but “the best auctioneer.”

By the time he was 17, Lee had perfected a sing song chant partially to the tune of “Yankee Doodle Dandy” and told News and Observer columnist, Dennis Rogers, that he could do 590 words a minute by that age.” Now, you know why he was called “SPEED.” The average auctioneer would do somewhere between 300-400 words per minute according to some sources.

Rogers recounts that at 18 years of age, Lee tried out for a position as a Goldsboro warehouse auctioneer along with 4 other men. The crowd was so impressed they yelled, “hire the kid.” The warehouse did and Lee became the youngest tobacco auctioneer in the country in 1935.

Just two years later, one Friday night at the Liberty Warehouse in Durham, George Washington Hill, President of American Tobacco, approached him and told him he was going to New York and be the voice of Lucky Strikes on the radio. Speed says he was on the train to New York that night and the next night in front of a microphone during a commercial on Lucky Strike’s “Your Hit Parade.”

Speed never made a living selling tobacco thereafter. Rogers credits him with earning $450 a week as a national celebrity at 20 years of age. The final line, “sold to American” became his trademark. Shortened to “LS/MFT,” everyone knew the commercial. He traveled the country giving interviews and speeches and doing charity auctions for Lucky Strike. During World War II, Speed sold $218 million in War Bonds, including $7 million in one day on Boston Common.

According to Rogers, Speed appeared in 11 movies. Another account credits him in 8 movies with Dale Robertson and 7 movies with Glenn Ford. He has pictures in Hollywood with Sinatra and many others.

Now for the Fuquay connection. During his two years of work before becoming the Voice of Lucky Strike, Speed sold tobacco in Oxford, Fuquay Springs, Whiteville and on the burley market in Tennessee. Riggs roomed at the Ben Wiley Hotel with Sam Amos and was friends with Bruce Howard who did the calculations on the local market.

While in Fuquay Springs, he met one of the fair young maidens of Varina in Wake County. Walter and Lola Dennis, having lived in Neills Creek, Harnett County in 1910 and in Chatham County in 1920, had moved to Fuquay Springs by 1930. Their family included the four Dennis girls: twins, Lucille and Kathleen, and the two younger ones, Myree and Nora Belle.

A beauty, Nora Belle caught the eye of Speed Riggs and they were married on December 29, 1937 by Rev. C. H. Norris, Baptist Minister. Bruce Howard, later Mayor of Fuquay-Varina, and long time tobacconist, signed as a witness. Nora Belle and Elizabeth Howard were good friends from school days.

Among the Dennis girls, Kathleen would marry Bill Byrd and this collection of material to the museum comes from her son, John Robert Byrd. Myree married Robert Williams and their children are Robbie Williams and Jane, still residents here. Lucille worked as a postal clerk. Married twice, she eventually lived in California.

The Riggs couple made their way to California, living in Fullerton, Anaheim, and owning a ranch at Resada on which Speed raised saddle-bred Palominos. At some point they were divorced and Nora Belle remarried. There were no children. Nora Belle died in 1985.

When the cigarette commercials were banned on radio and television in 1969, Speed formed a non profit called “Your Community Fund.” His purpose was teaching job skills to the handicapped and under privileged.

Ill health prompted Speed to retire to North Carolina in January, 1986. He lived with his two sisters in Rocky Mount and later in Goldsboro. When he died on February 1, 1987 in Goldsboro, his memorial service was delayed until the following Saturday, February 7. Among the speakers listed in the program was W. W. “Billy” Yeargin, President of Tobacco History Corporation and later a featured speaker across the state. Other dignitaries sent remarks according to the program and clippings kept by John Robert Byrd.

Perhaps the greater treasure was a copy of the Western Union Telegram which came to Beatrice upon his death. Dated Feb 5 Govt White House, DC

“Nancy and I send our heartfelt condolences on your brother’s death. Speed made a unique contribution to our cultural heritage and he used his time and talents to benefit the needy and to help our nation’s war effort. Our thoughts, prayers and sympathy are with you.”
— Ronald Reagan

Speed served as one of the judges at the first annual tobacco auctioneering championship in Danville, Va. on Sept 12, 1969. Actually, the writer notes that the first auctioneer began his art in Danville in 1858 with the first loose leaf sale.

Auctioneers held Speed in great acclaim across the United States. In 2003, Lee Aubrey Riggs was entered into the North Carolina Agricultural Hall of Fame.