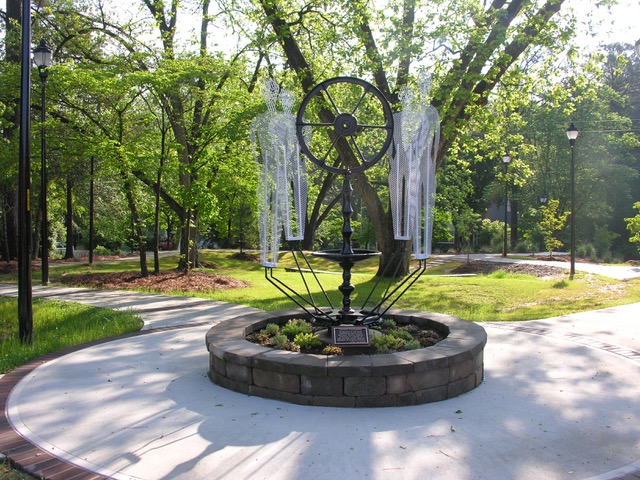 For our Centennial Birthday Celebration in 2009, the program included a presentation on the Mayors of Fuquay Springs and Fuquay-Varina from 1909-2009. During those years a total of 28 men had held the office of mayor, several more than one time. At least four other men had served as acting mayor for brief periods either following resignations or after the assassination of Dr. Cozart.

That centennial research did not uncover a lot of information on several men listed in our Roster of Mayors. Neither were we able to find anyone who could definitely remember these “missing” gentlemen to help with biographical information.

Since that time, the museums staff have kept all eyes open should any of these names appear. Sometimes a newspaper reference has surfaced; at other times a deed record has contained information. Recently, ancestry.com has also proven helpful with additional records.

While the future may reveal more biographical data as we locate more archives, we can now share a few more details of the lives of three of these mayors.

Since incorporation, our mayors have served two-year terms. There is no limit on number of terms or reelection— our current Mayor John Byrne holds the record for terms,
having been elected for ten two-year terms since 2001.

Information uncovered on three of our former mayors follows.

Mayor R. E. Kerr: 1919-1921 served only one term. From the town minutes, we learned that Kerr had served as a Town Commissioner several years. After 1921, he seemed to disappear, until we found an Independent article telling us that he had removed to Charlotte and was being recognized in the banking Industry.

Subsequently, we found that he was born September 12, 1893 in South Carolina and raised in the Rutherfordton home of his grandparents, John and Lelita Carpenter. Named Robert Emmet Kerr, he was the son of Jefferson Davis Kerr and mother Minnie Carpenter Kerr. In Fuquay Springs, the unmarried gentlemen was listed as a boarder in the Barham-Bullock Hotel in the 1920 census and was employed as a cashier in the Bank of Fuquay. His name as a notary for deeds and documents within Fuquay Springs appears from time to time in our archival searches.

After moving to Charlotte, Kerr met Ruby Edward Starnes of Mt. Holly, NC. and the two were married on April 12, 1934 by the Methodist minister of Mt. Holly. The business directory of Charlotte lists his position as Vice President of American Trust Company and Ruby as Vice President of Federal Soda Shop. They lived at 900 Mt. Vernon Avenue with two children, Robert Emmet, Jr. and Sarah Caruthers Kerr.

Mayor J. R. Boothe: 1925-1927 served only one term. Boothe had served as Clerk of Recorder’s Court and Clerk of the Board of Commissioners of the town.

John Robert Boothe, born Jan 28, 1863, was the son of William Boothe of the Holly Springs area of Wake County. He married Cornelia Holleman, daughter of William and Jane
Holleman of Holly Springs.

Boothe was an established lumberman and co-owner of a firm Womble and Boothe. Within the town of Fuquay, he invested in property from the Sexton estate in Varina and in the S.S. Fuquay lands of Fuquay Springs. The Boothe’s acquired two lots from the Harrison estate on which the Keith Hardware Building, presently T. R.Ashworth Inc., was later built.

In 1930 only three years after his mayoral term, Boothe died in Durham at the age of 67. Cornelia died in 1935. Both are buried in the Holly Springs Cemetery associated with their family histories. They had one son, William Colon Boothe who married Levi Womble of New Hill.

The only individual who remembered him was Jewel Ballentine Stephens who said she believed his name was Sidney. With the help of Ancestry we have been able to locate further biographical information on this family.

Sidney Augustus Adams was born April 2, 1904 to William Sidney and Luta Adams in Wake County. In 1930 Sidney lived with his oldest sister, Katie, widowed by the early death of her husband Boyd Herman Jones and left with three small girls. Sidneys’ other sisters were Necie Jones Oliver and Lougenia Jones Ransdell.

William had served as Town Commissioner under Mayor Kerr. Sidney was hired as a special policeman for July 4, 1931 along with J. D. Jones, J. M. Jones and N. H. Coley. Paid $3.00 , the town gave them credit for taxes that year. Elected as mayor on May 8, 1933 while the town was struggling in the midst of the depression, on July 3 Sidney was offered $25 by the town to collect taxes. This seems to be the reason he resigned as Mayor on July 10 and J. E. Howard was elected Acting Mayor. His success in the tax collection was not recorded in town minutes nor was he mentioned again.

William, widowed, married a second time during the depression. The Adams family was living in Wake Forest by the time Sidney Augustus married Louise Shepherd of Orum, N. C. on August 19, 1940. The couple resided in Raleigh where Sidney’s place of business was Carolina Tractor and Equipment Company. When Sidney died November 15, 1973, he was employed in the parts department of Gregory Poole Equipment. He is buried at Montlawn Cemetery.

To date, no one has uncovered pictures of these mayors to add to our archives. However, we are glad to add this information on town leadership to our archival records.
Perhaps this recount may stir memories or result in materials from the public.