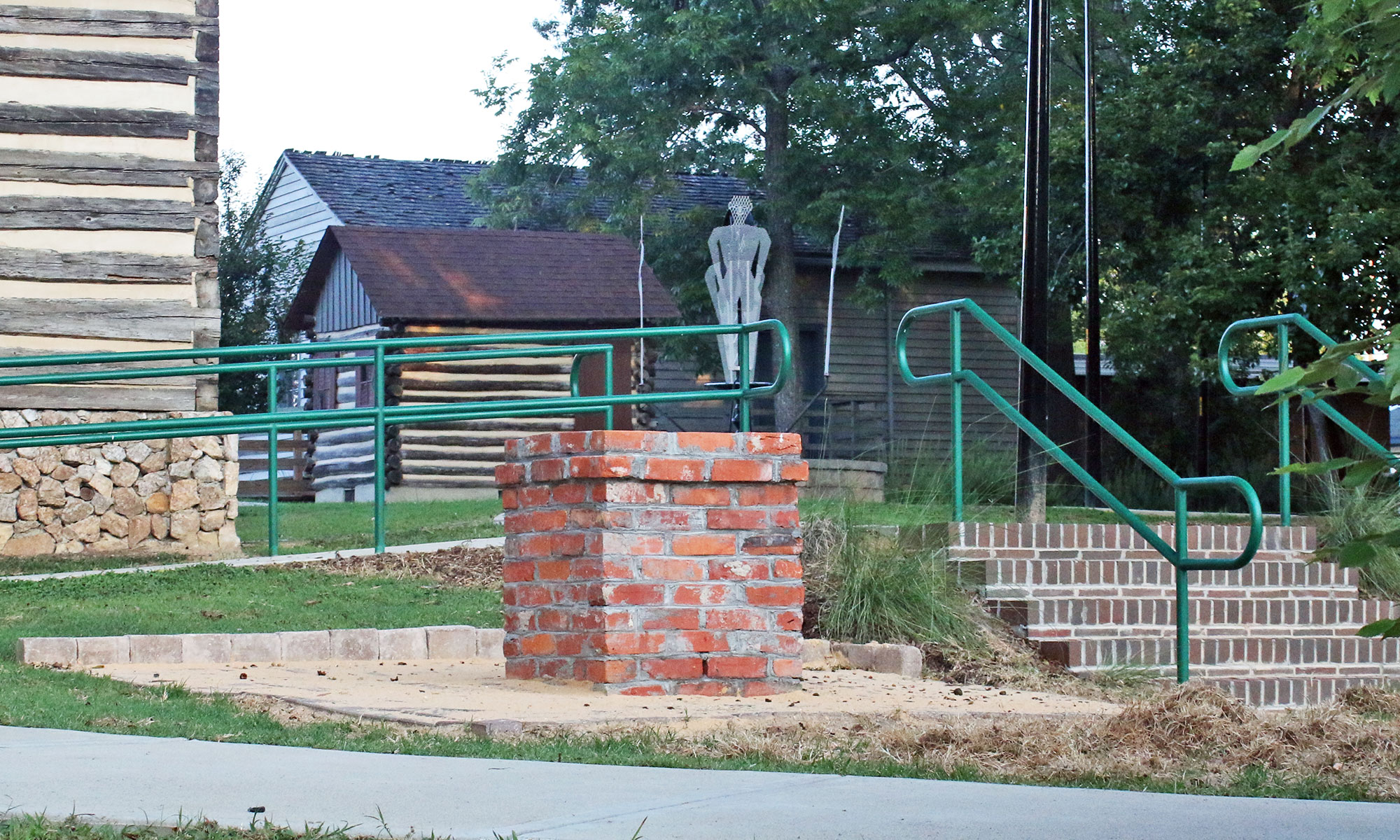 The Fuquay-Varina Museums plan to honor the History of Warehouses in our area by preserving some of the bricks salvaged from the Varina Brick Warehouse in our Ashworth Park. With the Tobacco Barn as a primary historic building, the museums have honored the myriad of small farmers on one side through the “Ghost Farmer” sculpture and now plan to honor the warehouse history on the other side of the barn.

An Eagle Scout, Alex Weiss, took as his project building a brick column using the old bricks to be topped with a sun dial. Board member, Dan Turner is working with Alex in securing the brickmason work needed. This work will be a teaching tool for the scout project, involving digging footings, moving the old brick, mixing the mortar, and actually learning the art of masonry. The sundial is a fitting symbol of the “past” of warehouses, the “present” interpretation of our tobacco history, and the “future” preservation of our history.

Clearly, our first warehouse, identified in an early photo by the Aiken Sisters on S. Fuquay Avenue, was originally located on a portion of our Ashworth Park Museums site. The Fuquay Warehouse was incorporated by E. J. Ragsdale, Tom Dean, and John Holland in 1908. Operated by W. H. Aiken, who helped promote the Bank of Fuquay in 1909 to handle warehouse financial needs, this warehouse was still run by Walter, Richard, and Allen Aiken in 1913. Other names came and went: the Banner, an early Farmer’s, and in 1915, Center Brick, located at the corner of Academy and Fuquay Avenue. The Gold Leaf of 1917 carried a front page ad for Center Brick still under proprietors Currin and Howard.

Varina Brick Warehouse was incorporated May 6, 1914 and built at the junction of the Durham & Southern RR and the Charlotte & Northern RR. Originally on lands deeded from B. G. Ennis and heirs to J. A. Sexton, a group called the Varina Warehouse Company, headed by John C. Utley, President and Secretary J. E. Brown were in operation with a mortgage at Bank of Varina by October 13, 1914. Not all the operation was productive and the warehouse defaulted in 1921 and was bid at public auction by Sim Meadows. Again a public auction in 1928 resulted in purchase of the warehouse by J. L. Adcock.

Meantime, another organization, Varina Improvement Company, incorporated the Star Warehouse on adjoining lots April 25, 1927 under J. L. Adcock, J. D. Perkins, and Sim Meadows. In 1929, the Star is the only warehouse listing a telephone in our local phone directory.

In 1933 the News & Observer listed four big warehouses competing in the tobacco market in Fuquay Springs. In Fuquay Springs: the Center Brick (now operated by the Aikens & Wells) Planters, located on Main Street (site of current Police Station) operated by W. F. Rogers and A. J. Rogers since the 1920’s, In Varina: Varina Brick operated by V. O. Tilley and George W. Adcock and the New Deal (new name of the Star) under Luther L. Tilley and J. C. Tilley.

Fast forward to 1948 and the Independent of August 12 lists twelve big warehouses opening for the fall market. Varina Brick 1 & 2 (an additional change) is still a major player along with many new names and two tobacco redrying plants, Old North State and Brown Tobacco.

Susan E. Adcock and George W. Adcock have purchased the Tilley & Nichols interests in 1946 and will lease Varina Brick to be operated by J. H. Akins from 1954-59. Subsequently, Susan Adcock will deed her 1/2 interest in the warehouse and adjoining cafe to John W. Pope in 1964 and Akins Warehouse, Inc. will deed their 1/2 interest to John Pope in 1967. The Pope interests will utilize the property for their Variety Wholesale business until The Pope Trust sold to Ample Storage June 10, 2014.

Fuquay-Varina’s final tobacco auction in warehouses took place in 2004; however, a few of the old warehouses remain as symbols of the past. Sadly, Ample Storage demolished Varina Brick in July, 2016 ending the life of the oldest existing warehouse building in Fuquay-Varina. Determining that Varina Brick was too “old and unsound” to be preserved, Bill Akins assured the museums it could not be saved. At the impetus of Tim Carroll (a neighbor of the warehouse his entire life and a Friend of the Museums), Ample Storage was willing to donate some BRICKS from VARINA BRICK to the museums so this piece of the important history of Fuquay-Varina will be preserved. The Board of the Museums found this an important goal for posterity!

The completed column is now surrounded by a patio built by Weiss. When landscaped, there will be some planting and a bench allowing one to sit and check the progress of the sun. The Sundial atop the column is being contributed by the Class of 1967, the last class to graduate under the name “Fuquay Springs High School.”

An appropriate marker will be placed upon the column and docents will include our warehouse history in tours for visitors. Visitors should be able to view this completed project within a few weeks.