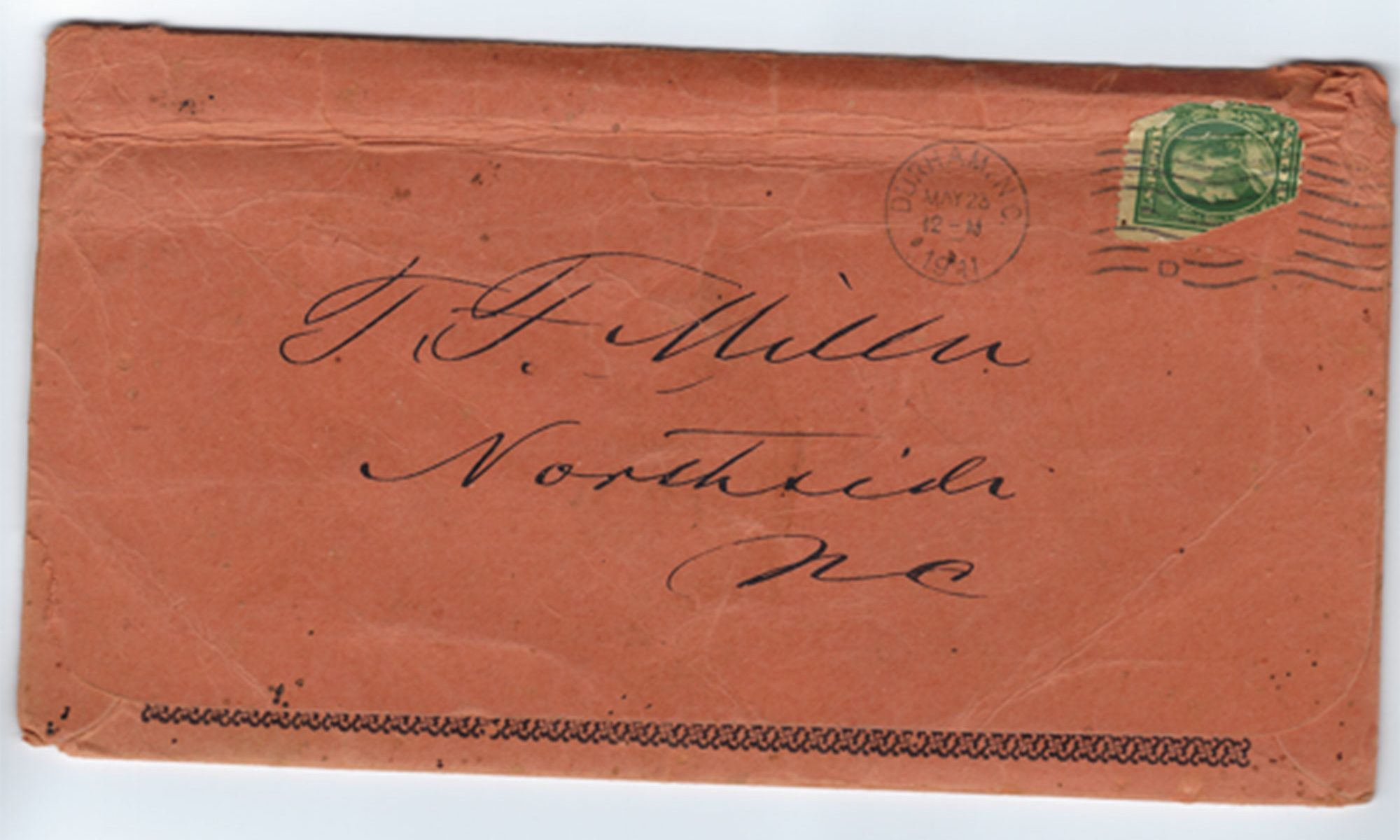 From time to time the Fuquay-Varina Museums receive information or materials which raise questions some of which can be settled by research. Others are solved through contacts who can shed light on the subject. Then we receive those for which we have no idea or source in our sights.

The matter of the J. F. Miller collection is just such a “mystery.” For solution, we are hoping that publicity might bring some clarification. Maybe someone will have a small piece of information which can direct our search.

We have an envelope from The First National Bank of Durham, NC. with a calendar for 1910-1911 and some bank details. That envelope was addressed in flourishing handwriting to J. F. Miller, Northside, NC. (There are several Northsides in postal history but we are not positive in which of these Miller received mail.)

Mr. Miller had an account with Judd and used personal checks of James M. Judd, M.D. at Cardenas, NC to pay the Bank of Varina $264.14 for fertilizer in 1917. Another such check paid $70.00 on the account in October, 1916. Dr. Judd was associated with the Bank of Varina and endorsed both checks.

Seven counter checks on the Bank of Varina were used by Miller during 1915-1917 for small amounts between $1.00 and $5.00. This collection came by donation of Tim Carroll who found it advertised on Ebay.

From Charlie Adcock, a printed copy of another sales slip from the Banner Warehouse was given to the museums showing Mr. Miller’s tobacco sales. ( Interestingly, this material states that the Banner Warehouse burned on January 26, 1914, victim of a blaze which spread from the Farmers’ Warehouse next door. The owners, J. T. Lea and J. W. Adcock sued successfully to recover insurance sold by E. H. Howard and Aiken drawn on the Atlantic Fire Insurance Company in a court action appealed from Superior Court in Wake County.)

This side light bit of information documents that fire destroyed both the Farmers’ and Banner Warehouses in 1914, located side by side, probably on Main Street just north of Academy. (The Adcock family thinks the family owned a warehouse located there.)

Questions are many. Speculation is free of course. Was the gentlemen, Mr. Miller, from Fuquay Springs or Durham? Did he farm land for Dr. Judd? Was he in town only for selling tobacco or, as indicated, for longer periods of time? Is the Northside address the area near Durham in which persons working a UNC hospital lived? Or is this another Northside, N.C.? AND why did all these documents surface in an EBAY collection recently? Most of all, who was J. F. Miller?

If you can shed any light on one of these documents, contact Shirley Simmons at the museums, please. These archival materials will remain a part of our collection for future research studies.