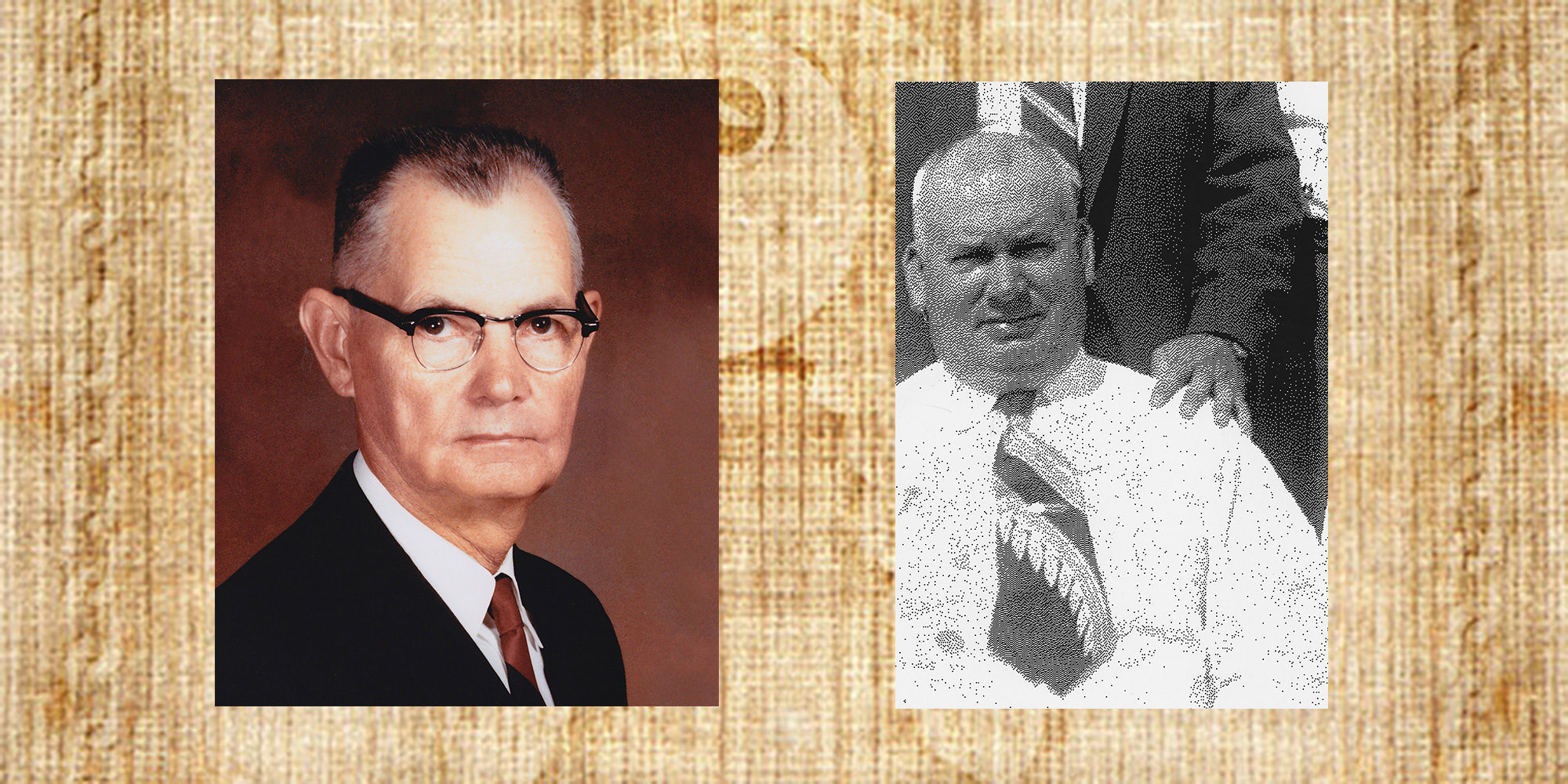 The Fuquay-Varina Museums staff often receives requests for help with information and research. Recently two sons of former Police Chiefs have come in on such missions and this had led to unraveling some interesting tales from the past.

One of our regular docents (he prefers tour guide) Bryant Tyndall is the son of W. T. (Pete) Tyndall. Policeman Tyndall is noted as an extra on the police force in 1950, served Varina as the night policeman in 1951-52 and was temporary Chief of Police July 15, 1952 while William Vaughan took a month off to harvest tobacco. From his youth, Bryant was interested in the bank robbery experience of his father as a town policeman in July of 1957.

Worth Whitaker, 41 years old from Garner, decided to hold up the “much robbed” (Independent’s words) Angier branch of First Citizen’s Bank and Trust of Smithfield that July day. This was the 3rd time this bank had been robbed since 1950. The previous week, robbers had taken $30,000 from the Bank in Apex. Whatever his impetus, Whitaker later said he ”didn’t know why” he decided to leap into the life of crime.

Fuquay police were alerted by bank cashier, Haywood Hall, who chased the robber to Fuquay. At the time of the robbery, Hall was out to lunch leaving Teller Ben Price and clerk, Brookie Cotton to confront the robber. Whitaker had his hat pulled down over his eyes and asked for change for a $5 bill. He then handed them a satchel and told them to fill it up. The change at the window amounted to $12,392 all of which Price stuffed into the satchel.

Hall returned and opened the door, but when Whitaker motioned for him to come in, he realized there was a problem, slammed the door and ran to his car. Alerting the police, he gave chase when Whitaker fled in a car.

Whitaker abandoned the get away car he had stolen intending a planned escape to his own car which he had stashed in Fuquay. That’s where Tyndall entered the picture.

“I ordered him to stop several times and he kept going, so I shot him,” Tyndall related. Whitaker was shot in the jaw, treated locally by Dr. Crumpler and rushed to a Raleigh hospital into which he walked under his own power.

Afterwards Tyndall stated, “I thought he had a gun but he says he didn’t. ” Dr. A. G. Crumpler said Whitaker told him he didn’t need the money. Crumpler found him to be a nice guy. Fellow employees at the Raleigh Times-News and Observer described him as “the quietest person known.” His boss at the Times later speculated that he had financial difficulties and had recently purchased a new home. Lost in time is the actual “why?”

Later that August, Tyndall received a letter from J. Edgar Hoover, Director of the FBI. His laud of Tyndall reads, “The splendid assistance rendered by you in connection with the case involving Worth Alexander Whitaker merits the deep appreciation of the personnel of this Bureau and I want to take this opportunity to commend you on your outstanding and courageous performance of duty. All of us are grateful for your help in this matter, and the personnel of our Charlotte office join with me in offering our sincere thanks for your excellent cooperation.”

Bryant remembered the commendation from Hoover and something further. After whatever time Whitaker served for the crime, Officer Tyndall and Whitaker met and became friends. Bryant remembers the reconciliation of these two men from his boyhood years.

Our second son of a former Chief of Police came while we were trying to uncover the story of Tyndall’s experience. Norwood Pritchett was seeking to discover a story of his father, W. L. Pritchett and a robbery of which he has sketchy memories.

Pritchett is first noted as serving as a daytime policeman during tobacco season in 1947. Town records show he was employed on the force June 10, 1949. From June 4, 1951-July 15, 1952 he served as Chief of Police in Fuquay Springs. After a stint with the Wake Sheriff’s Department, he again returned to be Chief of Police in Fuquay Springs from May 10, 1961-September 1, 1961. For career reasons, he resigned and returned as a Deputy with the Wake County Sheriff’s Department.

Norwood has a picture which he connects in his memory with a robbery incident. We are still working on confirmation of the Pritchett story. Hopefully this may prove a later tale to recount.