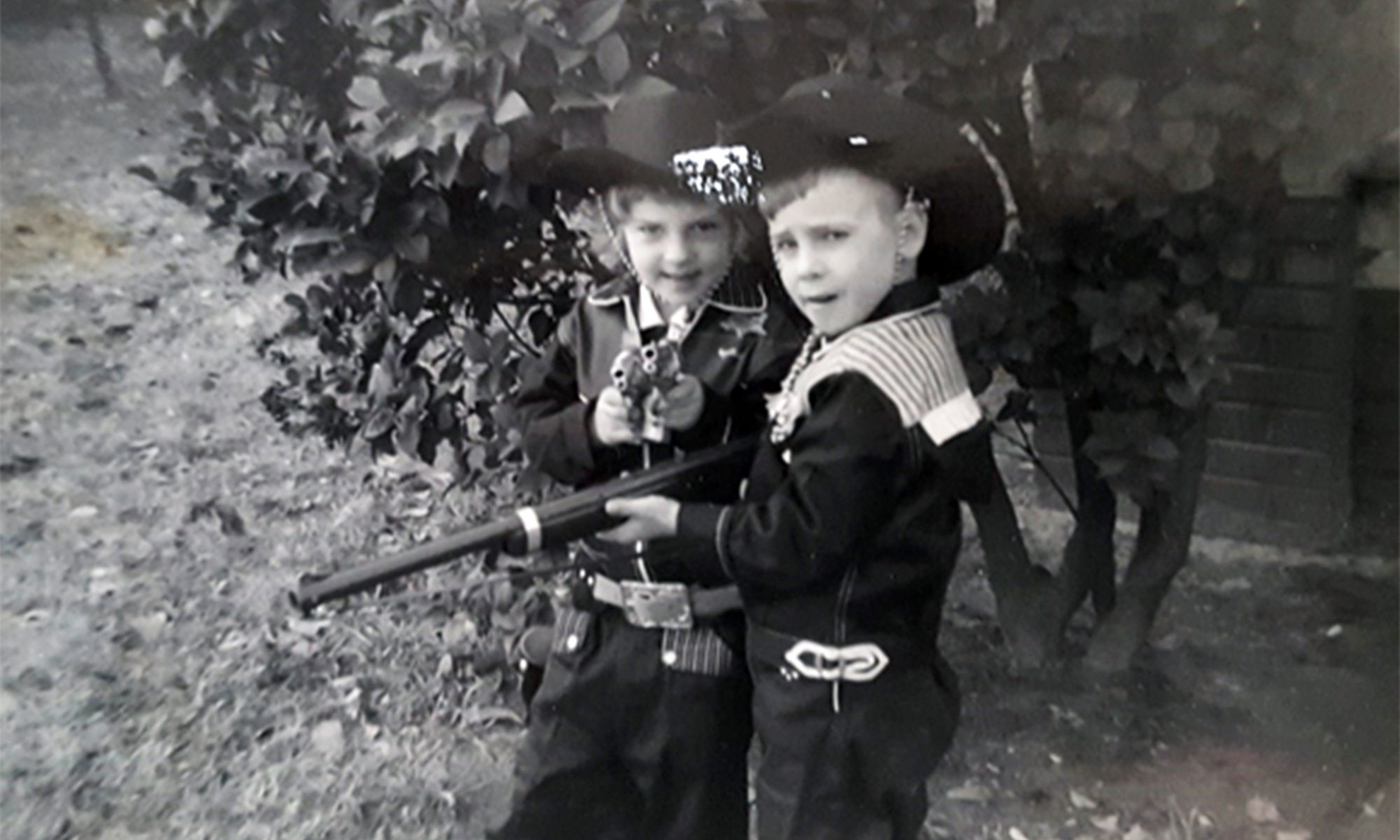 To borrow from Paul Harvey, we have some of “the rest of the story” to share. After our Historically Speaking account of the Angier bank robber who was arrested by W. T. “Pete” Tyndall in July of 1957, one of our docents, Gail Amos Woolard excitedly told us that she was an EYEWITNESS to part of this incident.

We arranged for her to come into the museums and surprise Bryant Tyndall with her additional information. She began so professionally by sketching her memory of Ennis and Main Street and explaining the total of her grandparents’ home and neighborhood. It took Bryant a little while into the story before the light bulb went off and he realized that she was telling him about the same robber his father had encountered. The rest of us learned a great deal more about the intersection of Main and Ennis in 1957: events, people, and properties.

Gail Amos Woolard and parents, Sam and Flora Amos, lived on Ennis Street near the corner with Main in the home of her grandparents, the Wingate Howards.  The house was located where CVS is built today.  Next door on the south corner of Main was a Crown station run by the Laniers which the Amos family had dubbed “the glory hole.”  Always, the station was abuzz with “news”  reports.

Directly behind the station, Granny Howard’s yard had a gold fish pond surrounded by a small flower garden. The station corner itself was a partially paved area, loosely covered in sand. Along the Howard property line was a low brick wall on which Pops Howard often sat and visited with passersby. On the west side, the property bordered that of the N S Railway.

That July morning, while Worth Whitaker was fleeing in a stolen car from the scene of his robbery of the Angier bank, six-year old Gail was playing in the yard while Granny was busy raking. She distinctly remembers someone yelling from the “glory hole” that a “robber was coming.” Simultaneously, Doris Snead wheeled into the corner lot with her children, Sammy and Judy, and informed Granny Howard that “the robber was coming that way.”

To everyone’s surprise: Howards, Amoses, and Sneads— all watched as the fleeing robber lost control in the intersection and plowed into the Howard’s wall. They all watched him jump out of the car and take off running to the south.

Adventurers that they were, Gail and Sammy gave chase to see where he was going. She remembers running down into the Perry Howard back yard and across the Hopson property next door. Later Mrs. Hopson would become her school teacher but at this point she can still hear Miss Myrtle yelling, “Get out of my yard,” and surmising that she was going to be in trouble with the neighbors for this trespass.

The intrepid pair continued through the Faucette Steet vicinity, reaching the arrest scene at the Ice Plant, then located on the distinct paved area near the First Methodist Church, just in time to become eyewitnesses. Pete Tyndall was drawing a bead upon Whitaker with his gun. Gail remembers Tyndall’s clear yell for the robber to stop.

Next she recalls some sparks in the air, followed by the sight of blood on the robber’s cheek. Her surmise is that the bullet ricocheted off something and glazed Whitaker’s face. Ironically, Bryant says that his father had never fired the gun prior to this.

Gail saw Tyndall handcuff Whitaker and heard that he was taken to Dr. Crumpler for treatment. She doesn’t recall how she returned home, perhaps the adults had realized the situation and followed them. She does recall that the talk of Varina was “that Pete had shot the robber.” She doesn’t know whether Whitaker’s personal getaway car was stashed at the Ice Plant or nearby or just how Tyndall happened to intercept Whitaker at that site. Her childhood memories of Pete Tyndall as policemen in Varina are vivid. She continually ran into him as she plied Broad and Ennis Streets and others on her bicycle.

Varina seems to them to have been a child friendly place to live and explore. Having met and married Dale Woolard, she had many times recounted the incident as eyewitness to her husband. Dale knew Worth Whitaker as a resident of Hilltop Road in Garner. Neither of them recalls how much of the twenty year sentence Whitaker actually served in prison. Some twenty years later, Gail and Dale was eating at Toot-n-Tell It on Garner Road, when Dale pointed out “that man over there is your robber.” Gail recalls the scar on the side of Whitaker’s face at that time.

Whitaker apparently lived out his life in the Garner area and became friends with Pete Tyndall just as Bryant remembers. Gail, the child, just never associated her “Pete” Tyndall with W. T. Tyndall, father of Bryant. Now the two are continual sources of VARINA LORE for all of us at the museums! Perhaps there could be more of “the rest of this story” out there!