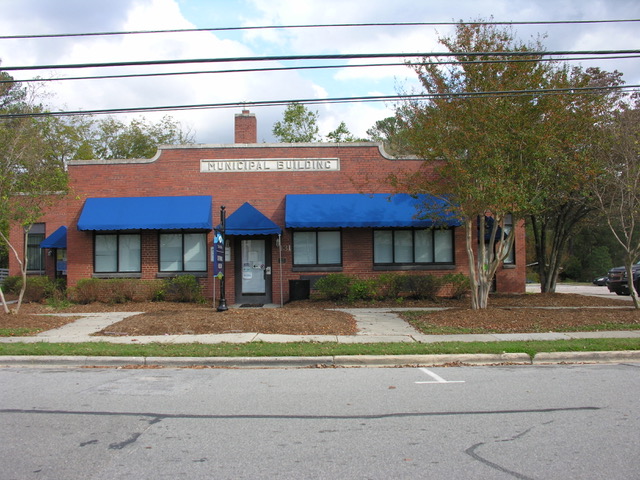 The portion of our Fuquay-Varina Museums which is termed the Centennial Museum and Archive is located in the building which is clearly marked “Muncipal Building” right over the center door. Located at 131 S. Fuquay Avenue, the building does have an important historical significance which we shall attempt to share in brief. The entire 3/4 of a block, now known at Ashworth Historic Park, likewise has a remarkable history.

Prior to the erection of this Municipal Building, there was no real home for town government. At times, the Mayor and Board of Commissioners met around town, in the Ballentine Building or other places. Some official work began to take place upstairs in the Thompson Building, commonly known as Elliotts Pharmacy and Elmos, after it was rebuilt in 1916. The museums have a sketch showing the location of the Recorder’s Courtroom and offices over what is now Elmos. The Recorder’s Court dates from 1917 in that site.

At times the mayor maintained an office in the upstairs, the clerks and some other officials were known to work there, along with law offices, beauty shops, and other businesses. Some people remember that over the Elliott’s part of the building one got medical “shots” of different types. Everything town related left there in 1951 with the erection of our “Municipal Building” ie. the Centennial Museum.

Originally about half the block on Fuquay Avenue was the site of the first tobacco warehouse (1908) in Fuquay. Following that the block then became home to a number of dwellings—Daughtry, Ashworth, Rogers, Holland, and Van Hook come to mind. There was a Bunn bakery which many remember. At one point the Fuquay Springs Post Office was located in a building where the recently vacated library was later constructed.

Finally in 1951, the town constructed its first “muncipal” home, this building on Fuquay Avenue. Mayor Dr. Wiley S. Cozart presided over the groundbreaking and led the effort. Dr. Wiley H. Cozart recalled his father actually journeyed to New York to acquire the steel needed to complete the structure.

According to the Independent (August 23, 1951) the building, built by A. Y. Hairr contractor, cost the town $53,000. Secretary of State, Thad Eure, gave the dedicatory address. He declared, “Tobacco as one of the things that has moved this town. You have long helped the state to hold the leadership on tobacco but to continue to hold it, a good research program is necessary.” At that time tobacco was sold in 10 warehouses. (Eventually a high of 12 warehouses operated in the area.)

Over time the town purchased about 1/2 of the block. At times using houses on either side of the brick building, there were offices related to town functions. The recently vacated library building was designed and constructed by the Town, and the library moved there in 1988. Also, in 1988, the Town vacated this municipal building and moved to Judd Parkway into the second municipal building which they occupied until this month. For a time DMV used the entire old municipal building for licenses and license plate operations.

Fuquay Springs Quester Chapter # 1134 signed on with the town to provide a museum called the Ballentine School House. Moved to the block in 1993, they began interpreting history there in 2000. All the civic organizations in the area supported this building’s move. Questers further secured town permission and with town help moved the Little Fuquay Springs Post Office in 2008 to operate as the second museum.

The Centennial Commission occupied the front of the municipal building during the centennial year and built a display of artifacts as an exhibit for the centennial. Not wishing these artifacts to be lost and realizing the importance of a museum/archive could be to the town, a 501 c 3 non profit was organized. Since the Centennial of 2009, the Friends of the Museums, under an agreement with the Town, have operated the portion of the museums called our Centennial Museum and Archives in the front half of the building. DMV issues licenses, by agreement with the town, in the rear portion of the building.

With the town acquisition of the Rufus Ashworth property, now the Ashworth Historical Park site, about 3/4 of the block became public property. The old library building will revert from Wake County to town ownership this month. The Friends of the Museums have expanded
their local museums complex to include other components in the Ashworth Historic Park. Presently, the complex is in dire need of additional space to save our town’s history for our posterity.

The Friends of the Museums are presently planning to complete a replica of the Little Depot to complete our rail component at the museums. This will provide access to our Caboose # 375 for everyone. They recently placed a new roof on the Ballentine School House Museum.

The Board of Commissioners of the Town budgeted funding in 2019 for awning replacement on the old municipal building. They have also plans to evaluate and repair the leaking roof. The latter was of great importance as there has been some slight water damage which the museum could not afford to have continue. The Friends of the Museums have been fortunate that no artifacts have been damaged and DMV has had no damage to their operation. The Friends of the Museums, a non profit 501c 3, recognize and appreciate this expenditure of the town to maintain the building as part of the museums complex.

If you haven’t come in or just driven by, please do so to admire our new blue awnings. While they do match exactly the mail box in the corner and the new town signs, definitely they give the Old Municipal Building and the Centennial Museum a “new” look.

Check us out at fuquay-varina-museums.org or Facebook Fuquay-Varina Museums. Perhaps this history of the complex will whet public appetite to come, look, and learn!