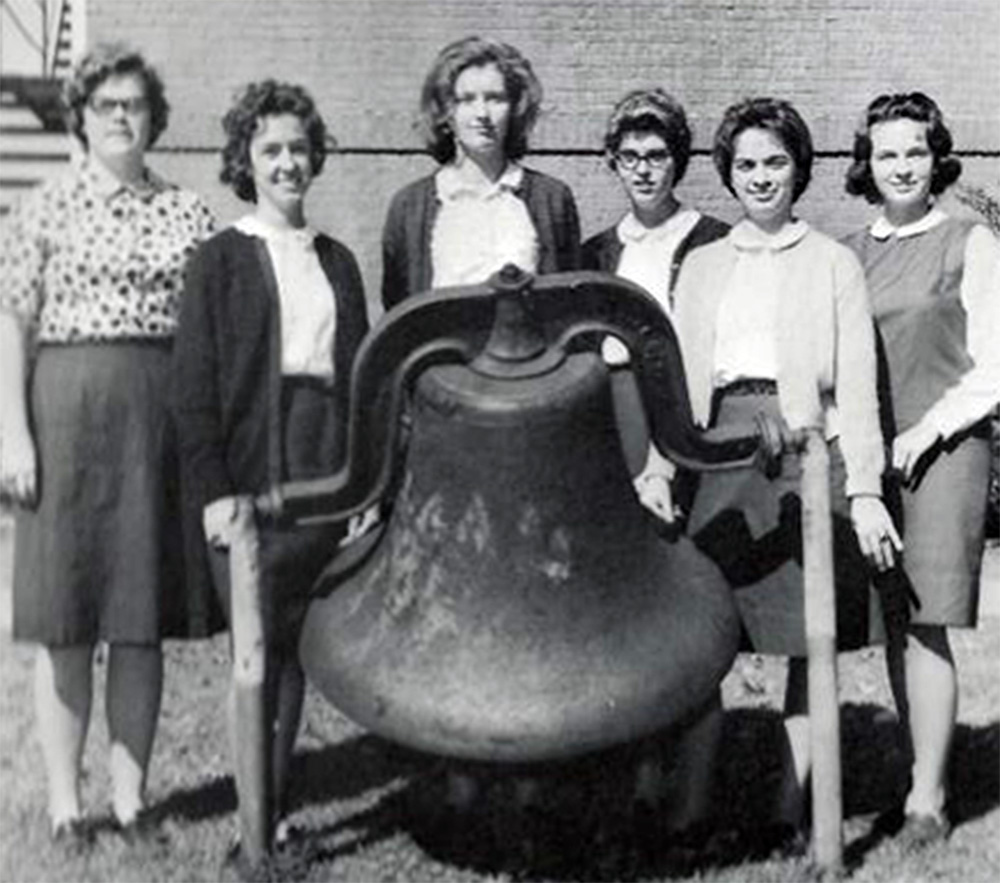 In the year 1915, the Town of Fuquay Springs, led by former mayor, E. J. Ragsdale, requested allocation of $15,000 by the North Carolina General for the express purpose of establishing a high school in Fuquay Springs. Construction began in 1916. When the three story building opened in 1918 on Academy Street , a large school bell adorned the top of the “old red building.” The entire school, grades 1-11, were housed in this building until 1928 when a separate high school building opened facing Ennis Street.

Reporter Shirley Hayes at Fuquay Independent interviewed a number of individuals still alive in 1977, who had special connections at some point in their lives to this first high school. Her account entitled “The Walls Came Tumbling Down ” appeared on July 28, 1977 as the demolition of the building was completed by the D. H. Griffin, Company of Greensboro.

One interviewee was Myrtle Hopson who, having agreed to substitute one day for Principal W. E. Fleming, remained 29 years as a teacher. Her bell memory came from the year her class of 49 fifth graders occupied the room upstairs through which the bell rope passed from roof down to the first floor office. She enrolled a new student whom she had to seat near the bell rope area. Suddenly the young man jumped to his feet calling upon all his classmates to ”get out.” Mrs. Hopson finally quieted the student, explaining that the great shaking of the building was caused by the bell being rung above their heads. “In California, we call that an earthquake,” he insisted. Numerous individuals recounted the terrific shaking of the entire building when the bell was rung.

The bell provided the entire town with a way to keep time every school day. When the first bell each school morning rang at 8:00 a.m. , all parents and students knew to get moving, for the second bell at 8:30 a.m. would signal the beginning of classes for the day. Some recalled that the bell rang for recess, lunch and dismissal of school at 3:00 p.m. Some individuals stated that it was also rung to change classes at some point in time.

Miss May Adams who taught seventh grade was assigned the room into which the bell rope descended. Her closet on the front of the building is remembered as the actual
terminus of the rope. Miss Adams supervised the ringing of the bell for many years. When Mr. Fred Hunt took over as interim principal upon the death of Mr. Fleming in 1950, he recalled that Miss Adams had her watch brought to him to set as she has done daily with Mr. Fleming. Hunt sent word that Miss Adams should feel free to use her own watch to ring the bells at the proper times.

At some unrecorded date, during the administration of Principal Ed Farnell, the school was remodeled and an electrical bell system installed throughout what had become a campus of several buildings. At that point the huge bell was removed from atop the “old red bullding”. Fred Hunt rescued the now silent bell, building a frame for it and placing it in a prominent place in the yard. It was popular for picture taking and occasionally painting.

In a civic effort led by Mrs. Frances Senter, Joanna Proctor and the Fuquay-Varina Woman’s Club, the idea of building a MINI BELL PARK was born in town. The bell was rescued and kept in a secure place when the middle school renovation began. The plan was to hang the bell permanently in the Bell Park along Academy Street near the original front of the first high school building. The Woman’s Club project led to their earning the Civic Improvement Project Award during the GFWCNC 1977-78 administration. A total of $8,000 was collected from various organizations with $1,000 coming from the F.V .Woman’s Club. Masons worked to build the brick columns atop which a steel frame was mounted to hold the bell. Note in the picture how the design was built to match that of the new building for the Fuquay-Varina Middle School. The expectation was that the “old bell” was home for ever!

Sometime subsequent to 2000, the Woman’s Club realized that the bell had been taken down from the frame. After a bit of sleuthing, Frances Senter and Shirley Simmons uncovered it hanging on a new frame in the interior of the Fuquay-Varina Middle School Campus. That is where is resides today.

Kim Johnson, current President of the Fuquay Springs Quester Chapter # 1134 and daughter of Frances Senter, brought our attention to the fact that few people seem to be aware on the current campus of the real origin of the bell. The Questers became inspired to place a marker recognizing the significance of this important piece of history. Chapter thinking is that this artifact of our town should be clearly identified and preserved.

We began trying to ascertain why it was removed, possibly when some work was being done on the new building along Academy, Street. We found that some long-time staff at the present middle school actually don’t know why a new tower was erected and the bell placed upon it.

Donald Cotton, graduate of Fuquay Springs High School, former teacher and Principal, and former official of Wake County Public Schools, suggested that we contact the Wake County Schools to see why the bell was moved and what might be done now. Mr. Greg Clark, Senior Director of Maintenance and Operations agreed to look into the matter. Word has been passing around that “someone is asking the question.” To the present date, no one seems to have an answer.

Compounding the issue since the Questers began the effort to mark the bell is the fact that Wake County Public Schools will erect a new Fuquay-Varina Middle School at another site in the near future. Exactly what might become of the present school site has not been determined.

Hopefully, with the Fuquay Springs Questers leading the effort, one of three things can happen. Preferably the old bell can be placed again in the Mini Bell Park along Academy Street on the original building site. If not, then the Questers would like to identify a site for the old bell and to place a marker identifying the historic relic. This could mean a move to the museums grounds if the campus is abandoned and a new middle school is relocated as is being considered by Wake County presently. If there is a school kept on the campus in the future, then the bell could be marked and included perhaps along Academy Street again.

We solicit the public will to see this bell identified and remembered forever! Join in our appeal to Wake County Public Schools for the “best” resolution! Help us be certain that the bell is protected throughout any changes coming for that campus, too. The old bell is an important artifact from our town’s past and must not be abandoned.

Principals of the high school located on this campus

The museums would welcome a listing of principals for the Fuquay-Varina Middle School on this campus to add to our archival base.